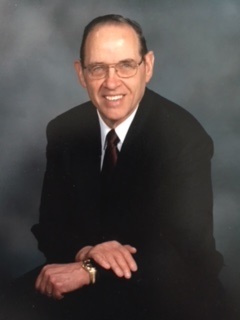 Robert E. Vickroy, 76, of Cassopolis, Michigan, while surrounded by his loving family, went home to be with the Lord, Saturday, April 28, 2018, at Lakeland Reginal Medical Center in St. Joseph, Michigan.

Service Times
Friends may visit with the family, Thursday, May 3, from 11 A.M. until the memorial service at 12:00 pm at Calvary Bible Church, 27032 Marcellus Highway, Dowagiac, Michigan. Service officiated by Pastor Stacey Wilder, his son-in-law. Memorial contributions in Robert’s name may be made to Calvary Bible Church. Those wishing to leave an online condolence may do so at http://www.clarkch.com.

Obituary:  Pastor Vickroy was born on August 12, 1941, to Ross and Pearl (Roberts) Vickroy in Gladwin, Michigan. He graduated from Byron High School in 1959. He married Barbara Wooden in 1962. He received his Bachelor of Arts degree in Bible from Bob Jones University, Greenville, South Carolina, in 1966. Following his graduation, he pastored churches in Stanzel, Iowa, and Linesville, Pennsylvania. In 1974, he accepted the call to serve as pastor of Calvary Bible Church in Dowagiac, Michigan, and remained in service there until his retirement in 2016. Bob Jones University conferred the honorary Doctor of Divinity Degree in () May, 1993. Pastor Vickroy served the Lord faithfully in ministry for 52 years. He demonstrated a pastor’s heart to the people in the church, the community, and around the world. Pastor Vickroy enjoyed spending time with his family, hunting, fishing, and watching football games.